By da Bosz September 27, 2021
After a short night that followed the evening before, we met at the venue in the morning around 9:00 and I was bound to meet Frank with his List of Early Successor. These were the first succeeding kingdoms after the death of Alexander the Great in 323 BC, which fought over supremacy of the territories once controlled by him. Some of the armies of the succeeding kingdoms have unique army lists, such as mine which is depicting the Seleucid kingdom from 206 BC onward. Frank's list is to be found in the army-list companion "Immortal Fire" and dated 92 BC. So, to be honest, his early successors are not that "early".

Frank's Early Successors were composed of:

The army list - contrary to mine - relied on the use of Medium-Foot units for possible terrain. I won the initiative with the same +1 on his dice roll Frank had and chose agricultural. After all the dice were tossed, the table's terrain looked as followed: 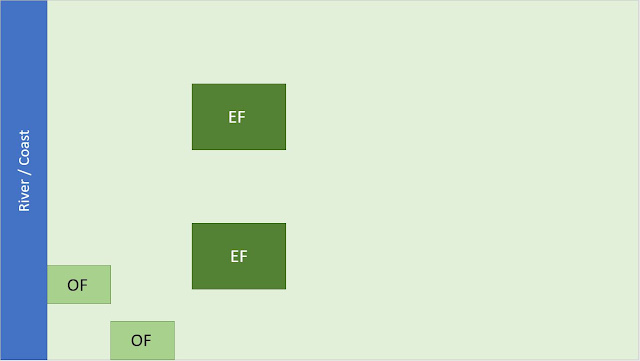 The two enclosed fields (EF) posed a heavy threat to me, as I have no units available to storm them against his medium foot without loosing dices. I would thus try to avoid them and delay the left flank as good as possible.

Schematically the table looked like this at the start of the game: 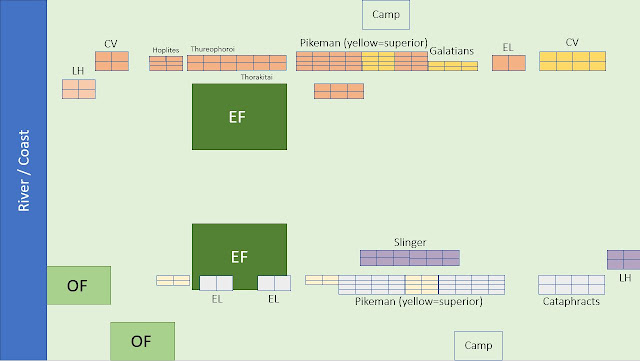 My overall tactic was to use the cataphracts as I had done previously and kill the enemy horseman on the right flank with my superior armour. Frank protected his horseman up to a certain amount against that by placing his elephants besides the horseman. One does not want to send horseman fighting against elephants, as they loose 1 out of 3 dices due to the elephants smell and that neither armor nor swords count for PoA's. Thus, one would fight hitting on 5's with 3 vs. 4 dices which hit on 4's. So that's not a good prospect to win such an encounter. I had thus to use one of the line's pikes to counter the elephants - this turns the table here, but at the cost of overlaps within the main line.

In the center, I planned to use my skirmishers to pull his battle-line apart and thus be able to create overlaps by myself. This takes some finger-play and timing, but would, if it worked, overcome the disadvantages of Franks overlaps - at least a bit.

On the left, I would have to hold the enemy as long as possible and bind more points without getting hit in the flank. This would be hard, but maybe I could hold out long enough to win the right flank and  subsequently the center without loosing to many units on the left. 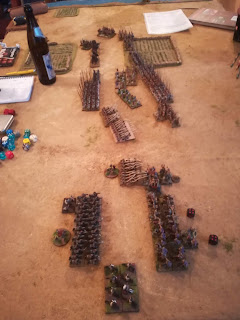 On the right, my Pike came to contact the Elephants with one base width during impact, limiting the dices which hit on evens (3vs2 instead of 6vs4). Using the general in front rank to boost my re-rolls (on 1 instead of none), which was not possible to Frank (as elephants can only get better re-rolls with generals mounted on elephants, which are not available to his army) raised my chances further. This comes at a risk: if two hits are inflicted upon the unit, Frank may kill my general on a 12 if he looses or draws  the combat, and on an 11 if he wins. After melee the elephants are on a net minus (hitting on 5's, whereas I hit on 4's) - which should solve the elephant problem after some time. If their death-roll after a lost melee goes wrong once, they are auto-broken and the problem is solved, otherwise they'll probably go down due to cohesion losses. They are powerful yet fragile creatures, thus it is important for the player to bring their full base-width into contact on impact. I managed to avoid that by charging myself - on my conditions. For elephants, it's simply do or die.

I furthermore had to use two more generals (as Frank did, as well) on the right to make sure that my Cataphracts stood a chance in impact and afterwards against the quality-wise better Xystophoroi. Here I had to survive the impact (on evens - both hit on 4's), to have enough bases and dices to kill him during the ongoing melee turns, where Franks horseman would be hitting on 5. But, having 3 out of 4 generals in melee, I'd need to delay the main lines impact, as having only one general available would be a high risk - all the more since I was on a disadvantage there.

And then, there was that problem on the left to be taken care of. 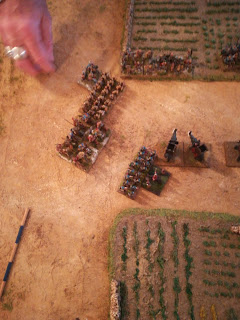 Between the two enclosed fields I used my two Elephants (together 100pts) to hinder the Thureophoroi (48pts) as well as the Thorakitai (60pts) from getting into the flank of my main-line. In the open, the chances would be good for my elephants - but in the fields I'd loose any fight. So we both stood locked in a stare-down that would be solved only if Frank would manage to break through my Agyraspides who stood guard at the elephant's flank: 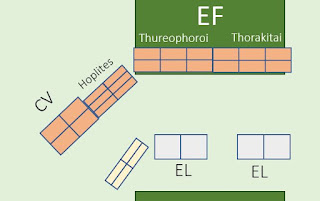 My Agyraspides were able to bind Frank's Thracian Cavalry and Hoplites for some turns, but as they did not loose a level of cohesion, the Cavalry made a disengaging move.  The following turn my Agyraspides went crazy and charged the Hoplites against my will. While the lads were still  stuck with the Hoplites, Frank moved himself into an outflanking position with the remaining two bases of cavalry and charged as it was his turn again.

Besides that, he forced my Elephants to charge his Thureophoroi by moving them out of the terrain and into a position, where, if they charged themselves, they would end up in the Agyraspides other flank, too. Thus I hoped for the best when intercepting their charge with my elephants. To be honest, the situation between the fields was rather dire. The Agyraspides broke after putting up a 2 full turn fight with opponents in their flank, and my Elephants did not perform good enough in the impact phase against his Thureophoroi and thus exploded due to too many hits they received in Frank's melee-phase (and a subsequent 1 for their death-roll):


After the Agyraspides broke, this put the other Elephants into a rather dire situation, as they were threatened from the front by the Thorakitai and from the side from the Thureophoroi, who made a 90° turn in the meantime. Lets swing over to the center before we resolve that situation, and have a look what happened here in the meantime.

In the center I wheeled my battleline in order to prevent frank from getting good overlaps from the start and used my light foot to trigger his shock units into charging, such that his battleline would open up which would give me the chance to create overlaps by myself. Suffering from overlaps can get very ugly very quick for Pikeman, as they do not want to loose bases or cohesion in order to keep their PoA's.

Sadly, I only now after more than 1 year came to revisit the blog, found this draft and am thus not very sure about further details. It seems while the interesting action above took place, my pikeman and cataphracts on the other side of the table tore his line apart. I slightly remember the elephants opposed to the Thorakitai charged next and broke them, bringing themselves to safety whilst pursuing the broken unit.

So after game 3 I had moved up to place 3 and the total scoreboard read as follows:

Popular posts from this blog

A friendly game of Maurice

By da Bosz April 27, 2020
One of the great things about tabletop is that it may be even played during these dire times. And after a digital game of canvas eagles - maybe some pictures on that later - I met up with a friend to enjoy the great spring and a game of Maurice on the terrace. I highly recommend to listening to Benda's Concerto for Flute in E minor while reading this report to get you into the right mood. About the game Maurice is a game designed by Sam Mustafa which is based on an action-cards system. I was rather reluctant when I had my first game some time ago, but started to enjoy it more and more ever since. The basic mechanic is a deck of cards which each give a specialty and a range in base-widths. These may be used by the player to activate a force of his for a certain action (charge, march, rally) or to modify the outcome of a certain action or fight. For each action the player regains a certain amount of cards (charge 0, march 1, rally/shoot artillery 2 or if you pass the turn, 3). So
Post a Comment
Read more

By da Bosz December 26, 2019
..due to Christmas celebrations and preparations I was not able to finish the second part as fast as planned. I hope you all had a good time with your families and beloved ones so far and are now well enough rested to read on. The first part of the series can be found here . ... so, lets have a look at the other side of the table: My pikes were busy keeping the horseman to their front. After being close enough to charge, those horseman then had better insights concerning the stability of my ranks and two of them decided to charge, breaking through a unit of skirmishers. breaking through their own skirmishers, these horseman had bad times coming The result was, as expected, meagre. Both lost fragmentation and the unit on the right decided to loose a base as well during close-combat. In Field of Glory, mounted units which are fighting (more than 50%) steady foot troops have disengage during joint-action phase. But as the skirmishers which were broken trough during
3 comments
Read more

By da Bosz February 17, 2017
I bought these miniatures, supplied by donnington, on a bring and buy years ago - they were in a suspiscious blister saying "Romans, 2,5€". Good that I bought them, this was one of the best deals I ever made, after I came to know there was a full roman legion fitted for Field of Glory in there! I painted them last year alrerady, but didn't find enought time to make the basing. As this is done now, here they are! And there is another benefit: I may use them for my seleucids as well.
1 comment
Read more